To educate, inspire, and encourage participation in the political process by volunteering our time and resources to elect Republican candidates.  To promote Republican ideals of peace through strength, prosperity through individual responsibility, and liberty through limited government. 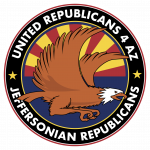 Action will delineate and define you.

The UR4AZ Board of Directors, supported by a critical mass of Republican activists, has embarked on an inside-out networking strategy to defeat the Democrat Marxists. From the school board to the House and Senate, the UR4AZ membership engages candidates to prepare for the battle against the Democrat party.

Carving out a new agenda for the Republican Party, the UR4AZ believes Republicans and Republican officials must realize the Democrats are serious about replacing our Republic with a Marxist government and have every intention to tear up our Declaration of Independence and Constitution.

To transform the Republican Party into an activist Constitutional Conservative Party, the UR4AZ is committed to Jeffersonian Republicanism. Accordingly, we prioritize the individual, family, and community as the centerpiece for educating, advocating, organizing, and mobilizing to increase and expand our natural, GOD-given rights.

Emphasizing issues over traditional campaigns and elections, the UR4AZ has developed a comprehensive program to educate, advocate, organize, and mobilize the electorate around the problems that matter to them and connect those issues to Republican candidates.

As with our Founders, the UR4AZ believes the states are political, economic, and social laboratories of the people, where Citizens, through their state representatives, shall be the final check on tyranny.